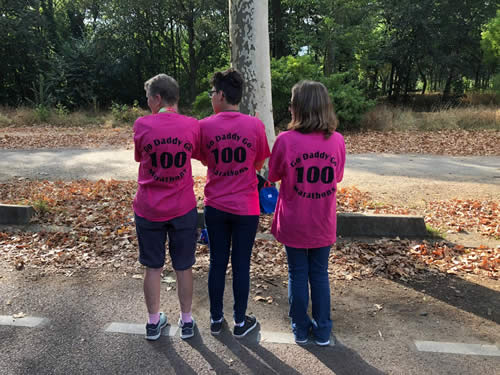 I ran and walked my hundredth marathon on my fifty-seventh birthday, through a beautiful wooded park on the outskirts of Paris. I felt great during the first of four loops of the course, like I actually was a runner again. Reality quickly caught up to me, as I had started too fast, and the second half of the race took a half hour longer than the first half. My legs were leaden and painful on those last two laps, and I was on the verge of cramping up. However, that did give me extra time to think about and thank all of the people who had inspired me, taught me, and supported me in my running. Thank you again!

When I prepared for my first marathon I trained alone, embedded in the mystique of “the loneliness of the long distance runner”. I liked running alone — the solitude, the time and space for uninterrupted thinking, the opportunity to be immersed in nature. But for my first, I ran the iconic Boston Marathon with my brother — we were “bandits” and not officially entered — along a route stuffed with other runners and thronged with rooting on-lookers. I had anticipated that I would be turned off by the swarm of humanity.

I was astounded when I heard people cheering for me. Why were they cheering when they didn’t even know me? I’ve always been quiet, verging on invisible — I’d need three or four meetings before I’d make a first impression on people. And when I eventually would receive attention, it always seemed dependent on my behavior — for being smart, or well-behaved, or kind. Strangers cheering me on just for running or for wearing a University of Rochester t-shirt felt like a different kind of acceptance and approval. And when one slower reader added to the “Go, Rochester!” shouts with a “Go, University!” cheer, it finally dawned on me that maybe humanity was more benevolent and encouraging than the apathy or rejection I had assumed was the default attitude.

Even greater than my surprise that others were cheering for me, was my shock that I actually felt inspired by these strangers yelling encouraging comments. Maybe there were dimensions to me beyond the isolated loner. That first marathon taught me something important and good about the world and about myself.

That first marathon also taught me to not start out too fast. My brother and I had agreed to run together, but had not trained together, and our initial pace was too quick for him. His calves started cramping ten miles in, and I was literally running circles around him as he walked much of the second half of the marathon. I barely had time to dash to the airport for a flight home six and a half hours after the start of the race (no long TSA lines in those days).

Except I really hadn’t learned the lesson. Two months later, feeling I was well-trained and wanting to run a full marathon at my own pace, I found a local marathon to run — and went out too fast, cramped up, and had to walk much of the last ten miles. Even after hearing the rule of thumb that for every minute per mile too fast you start out a race you will pay for it by going two minutes a mile too slow in the second part, I somehow felt it didn’t apply to me. (It does.) It took many, many iterations before I learned this lesson. But the marathon is patient. And now, when using a run-walk strategy, I have to relearn how to apply the don’t-go-out-too-fast lesson to that style. But the marathon is patient.

It also highlights that the marathon, like therapy, or like life, can teach in more than one way. Sometimes a new insight is revelatory and immediately life changing. And sometimes we understand something intellectually and have to practice and practice before our bodies really believe it.

My hundredth marathon did teach me how to avoid blisters. Because I have narrow, arch-less feet with my second toe longer than the first, standard shoes don’t precisely fit – and (here’s the rub) I had developed blisters from every marathon through ninety-nine. I had heard the claim, for more than thirty years, that wearing stockings under socks would result in friction being applied to the sock-stocking interface and not the sock-skin interaction, thus preventing blisters. I had even tried, years ago, wearing very thin socks under thicker, cushioned socks. It didn’t work. Having had horrendous blisters on some of my recent training runs, I went on the internet, found women’s ankle-high stockings, rejoiced that one-size-fits-all really meant it, and trained and ran the marathon with the stocking/sock combo. No more blisters. Yippee!

One marathon lesson I applied for my hundredth was to take opportunities when they’re available, because you may not get another chance. From one aspect, I wasn’t really ready to run a marathon in August 2018, having stopped running because of injuries the previous August, having had foot surgery in December, not even being able to walk until March, and only adding in a minute of running to five of walking in June, two months before the marathon. However, I had done endurance work on an exercise bike during parts of the past year, was walking at a 15 minute mile pace for up to fifteen miles at a time, and had five decades of training and hundreds of thousands of years of genetic heritage as a base for long-distance running.

My carpe diem approach to running developed after my first few years of marathoning. For my first ten marathons, I had asymptotically approached a sub-three hour marathon. (For those of you who don’t remember pre-calculus, asymptotically means that you may get closer and closer to your goal, but you never quite tote your ass over the line.) My official best was three hours and four seconds, meaning I had achieved 99.963% of my goal. I was young and healthy, and I kept thinking that there would be other chances to go faster. Didn’t happen then. Almost certainly won’t happen now, a quarter century later. Take opportunities when they present themselves, and don’t count your chickens before they hatch. It also meant that even though I had done a 24 mile run-walk training run and was pretty sure I would complete my hundredth, I knew that there was a chance I would get it 99.963% of the way done and not complete the last seventeen yards. So even though it was my slowest, and I may be in better shape and better prepared to run a marathon in the future, I am glad that I have completed my hundredth.

And the best thing that my hundredth marathon taught me was that marathons still have something to teach me. Just like life. 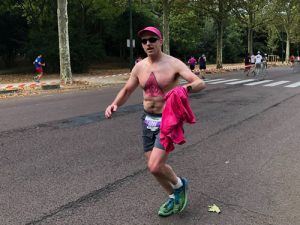