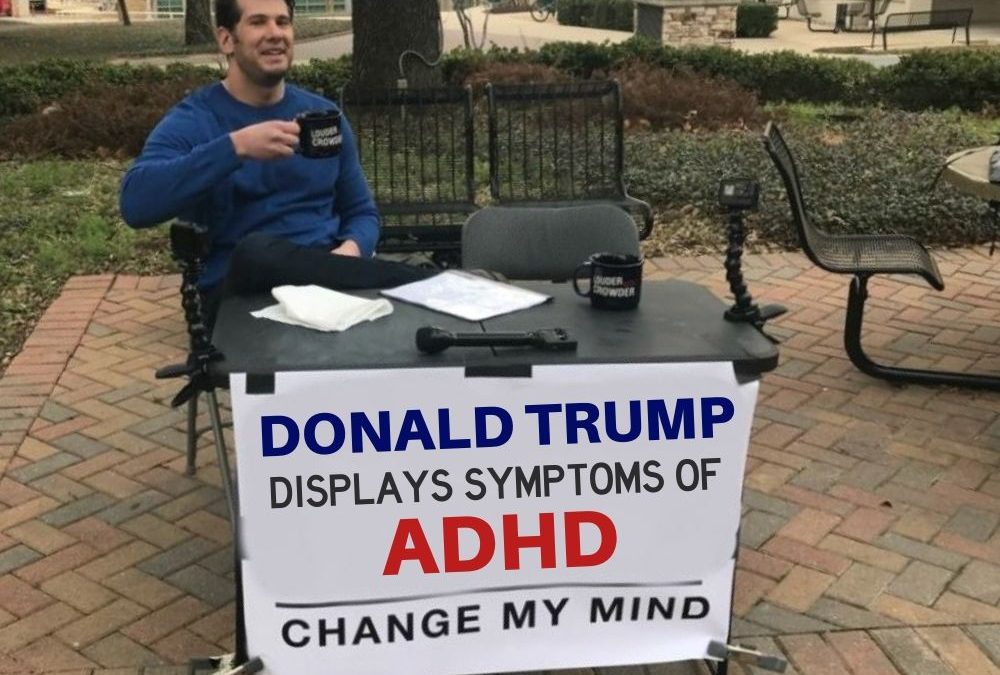 Attention Deficit Hyperactivity Disorder is one of the more common mental health conditions, and not just among kids – as has long been the common assumption. It affects at least 4.4 percent of American adults.

I say “at least,” because ADHD is widely unreported and often undiagnosed among adults. This is one of the main reasons I wrote “Recognizing Adult ADHD: What Donald Trump Can Teach Us About Attention Deficit Hyperactivity Disorder” – to raise awareness.

Having a president who consistently demonstrates ADHD behaviors yields a national teachable moment on this misunderstood condition.

Maybe you are one of the almost 10 million American adults already receiving effective therapy for ADHD, or the countless others who remain undiagnosed and untreated. Or maybe you’re among the tens of millions of family members, friends, and co-workers overwhelmed by the chaos, inconsistencies, and contradictions that come with living with someone with ADHD.

Even if you are not among those groups, we all live in a society that is growing
more ADHD-like, and that pushes us to react in ways that closely resemble ADHD-driven behaviors. We need to be able to recognize and understand these behaviors, as well as learn strategies for coping with them.

That addresses the ADHD part of the title.

Now what about Donald Trump?

One of the first questions people will undoubtedly ask is why I chose to focus my book on the president, inarguably one of the most divisive figures of our time. In discussing the provocateur-in-chief, won’t I run the risk of distracting from the book’s educational focus?

I don’t think so. While some may view a psychiatric diagnosis as a bludgeon to attack people, I think most thoughtful adults will realize that the mental health community uses diagnoses to try to understand behaviors that are troubling to individuals or to those around them. Many Americans watching Donald Trump remain curious about why he behaves the way he does. We should be talking about Donald Trump and ADHD because – whether we like it or not – his behavior affects us all.

He is also the one character that almost everyone is familiar with who consistently demonstrates behaviors associated with the diagnosis. And he reflects our society’s trends toward distraction and fleeting fascination with whatever is going at the moment. I focus on this facet in the book’s final chapter, titled “Is ADHD Contagious? Cultural Appropriation of the ADHD Community.”

I was inspired to write the book by a conversation I had with one of my adult patients with ADHD in the middle of the 2016 presidential campaign. We were sitting in my San Francisco psychiatry office a few days after the second presidential debate when she recognized Mr. Trump’s frequent interruptions, unfinished thoughts, rambling sentences, and incessant motion as familiar.
She told me that more people could come to understand the condition and people like her by seeing how ADHD drove the behavior of a powerful, prominent person like Donald Trump.

As the campaign proceeded, more of my patients began to ask me some version of “He has ADHD, doesn’t he?” As a psychiatrist specializing in adult ADHD, I felt compelled to examine the issue in more detail.

As more people hear about the book, I expect I will get many more questions, including why I chose not to follow the “Goldwater Rule,” the prohibition against diagnosing a mental condition without personally examining the patient. This I will cover in a future post. It is just one of a thousand questions I am prepared to answer in my project to use this national teachable moment to foster greater understanding of ADHD, and of Mr. Trump himself.